“Fifth column” is an expression used to designate, in a situation of military confrontation, a sector of the population that maintains certain loyalties (real or perceived) towards the enemy side, due to religious, economic, ideological or ethnic reasons. Such a characteristic makes the fifth column be seen as a group of people potentially disloyal to the community in which they live and likely to collaborate in different ways with the enemy. 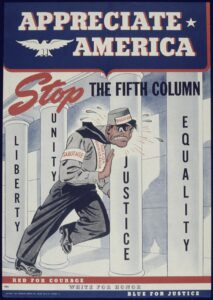 Ricardo Delgado Martín, founder of the Fifth Column, acquired an online course on biostatistics in March 2020. To buy this online course no previous qualification is necessary and the course is delivered directly with the diploma. This is all the previous training that the founder of the Fifth Column has on biology, so we conclude that he has scammed his audience with an absolutely false professional profile. We see what his curriculum was like before the plandemic: fitness monitor and opponent of the national police.

We also introduce you to the person with whom Ricardo Delgado spent his childhood, the poet Antonio Jose Trigo, the son of the founder of the Masonic lodge Mártires del Deber (41) of Lora del Rio, a lodge strongly connected with the central lodges of the Spanish Grand Orient (GOE) and with the Regional Symbolic Grand Lodge of The Midday (GLSRM),  founded between 1924 and 1936.

The lie got bigger. We go from graphene to the existence of a complete mind control circuitry based on graphene. Anyone with a minimum of knowledge knew that they are only observing crystals of salt and dirt. The show and the donations were to go on. In this way, a lot of people without knowledge began to see graphene and nanochip everywhere. Ricardo Delgado encouraged them to buy amateur microscopes.

8. Lies and scams of @infovacunas exposed. How he laughs at you in your face. Manipulation of papers and images. The white label of @laquintacolumna exposed:

9.  THE CAMPRA REPORT, PERFECT FOR WIPING YOUR ASS:

Heis a climate change expert who worked at NASA facilities funded by the Obama administration. Now it analyzes vaccines and claims to find “graphene”

With his geoengineering company CLIMATIC GEOENGINEERING SOLUTIONS he provides scholarships for senior managers at the University of Almería.

PABLO CAMPRA MADRID, the professor at the University of Almeria who WORKED in the Lawrence Berkeley National Laboratory research department  in California, under the Obama administration’s Department of Energy. At Berkley National Laboratory, the strategies against climate change that the US proposed to the G-20 member countries and currently contributes to the “fight against covid-19” were cooked:

The newspaper library tells us that during his stay in the US, Pablo Campra had access to theOmputadoras of the US Department of Energy and was able to access NASA’s Terra satellite data, a privilege that few researchers can access.

Campra not only fought against climate change, specifically worked “against global warming”:

SCIENTIFIC CLUB and the report prepared by Pablo Campra were used to introduce GRAPHENE in all non-Spanish-speaking countries  .  In our video Game Over Graphene, we follow the trail from its origins. We see several collectives and characters involved in the spread of graphene around the world:

The COMUSAV network is used for the distribution of graphene in different parts of the world, especially in Latin America.  Taking advantage of the popularity and wide acceptance of Chlorine Dioxide as an alternative treatment, its distributors have wide credibility and numerous networks connected around the world. The split and minor group of “Doctors for the Truth Argentina”, with the geneticist Marcelo Martinez as leader in the shadows, also help in the dissemination. Other secondary characters such as Colín Rivas also act as a liaison in English-speaking countries.

The network is much more complex and has Mirror pages  where the contents of the Fifth Column are translated and later shown in some  US Shows. UU as new analysis with graphene, dealing again and again with the same study

10. BRUTAL MAGNETISM IN UNVACCINATED 6-year-OLDS WITH SPOONS STUCK ON THEIR sweaty BODIES. BLUETOOTH SIGNALS DETECTED IN DUCKS AND DONKEYS and as much evidence:

12. THE BIG RESET MOVIE”. THE ABSURDITY BECOMES DOCUMENTARY THANKS TO JORGE ROCA VITORERO (W) OWNER OF A COMPANY THAT HAS MADE DOCUMENTARIES TO LOCK US AT HOME AND PUT ON THE MUZZLE:
https://odysee.com/@periodistasporlaverdad:5/big-estafa-grafeno:e?lid=442d4973cd525799c3a757e5b1466e156d1c18a8

15. GRAPHENE IS NON-TOXIC. It can be exfoliated from the tip of a pencil (GRAPHITE) and in the dose of a vaccine it would be totally harmless. It is a good conductor but it is NOT MAGNETIC:
https://t.me/periodistasporlaverdad/1282

16. LIFE-THREATENING AND VERY TOXIC ELEMENTS SUCH AS MERCURY ARE PRESENT IN VACCINES (TRIPLE VIRAL INFANT, INFLUENZA), These facts have been HIDDEN while DISTRACTING US WITH AN ELEMENT OF VERY LOW TOXICITY SUCH AS GRAPHENE (CARBON)
https://odysee.com/@periodistasporlaverdad:5/mercurio-vacunas:7?src=embed

YOU HAVE BEEN DECEIVED.

WE NEVER ASK FOR MONEY, WE ONLY ASK FOR DISSEMINATION